Objective: To study the gross micro structural changes in the testis of the offspring of Swiss albino mice exposed to oral use of tobacco during pregnancy.

Duration and Setting of Study: This study was conducted from July 2017 to December 2017 at Isra University Hyderabad

Methodology: 20 female albino mice were mated. After confirmation of pregnancy by vaginal plug they were divided into two groups; experimental A and control B of 10 each. Experimental mice of group A were given 5% tobacco in their chow diet and0water ad libitum; however, control group B were given only normal chow0diet and0water0ad libitum. After 15 days of birth the 10 male offsprings each of control and experimental mice were randomly selected. Their initial and final body weight was recorded.  They were sacrificed0by cervical dislocations and0their testes were taken away for further gross & histological0analysis.

Simultaneously, 5 micro structural variations were also observed in the testes of off-springs of mice. In0the0experimental group 0 of off-springs, very few 0 layers and decreased number of spermatocytes were noticed in seminiferous tubules of 9 testes.  Sperm degenerative changes, cellular inflammation and mild to massive hyalinization were noticed in 9, 6, and 9 testes of experimental group respectively. Loss of architecture of seminiferous tubules in 8 testes as well as destruction of the basement membrane in 7 testes were also observed in experiment group testes. However, the decreased number of spermatocytes in only 1 testes and mild hyalinization in 2 testes of control group were observed.

Conclusion: The consumption of smokeless tobacco has vital effects on the body weight, micro structure  and weight of testes of offsprings of mice given with cellular injury of seminiferous tubules especially decreased sperm count, cellular inflammation, destruction of basement membrane as well as massive hyalinization.

Infertility is commonest between couples0of child-bearing ages and around 50% of the known factors of main infertility are accredited to male0factor.1

Though, the etiology for male factor sterility is not clearly recognized. Whereas, some people can possibly be genetically susceptible for being sub-fertile.2 There remain chief epigenetic0factors that are concerned as main factors of male sterility. The male0reproductive system is thought to be responsive to several chemical and medicines that are found to cause adversative impacts on male’s reproductive function under bound settings.3

The use of tobacco products and the health consequences of0smoking and smokeless tobacco (SLT) are eminent. Crucial reasons exist for enhanced mortality and0morbidity within developed nations and therefore, primacy is growing in underdeveloped countries too.4 In spite of expanding data on harmful reproductive results of tobacco, it is comparatively vague whether, the smoking and smokeless tobacco has similar consequences on male’s reproductive events particularly among evidently reproductively active individuals. 2

Other likely unfavorable health consequences of SLT consist of toxicity of the cardiovascular, immune, and/or reproductive0systems.9

Health professionals have a well-thought-out exposure to smokeless tobacco noxious to reproductive process, influencing facets from pregnancy and fertility results in development of fetus and child. Tobacco comprises of hundreds of mixes that have harmful impact on reproductive well-being, like metals, nicotine, and carbon monoxide. Annually, together with over 4,000,000 births within the US,010% to020% of pregnancies lead to miscarriage or abortion prior to delivery, other 10% of pairs face childlessness or decreased fertility.1

Nicotine is used up in numerous ways varying from smokeless tobacco0products like snuff and chewing0tobacco to additional used up method: smoked0tobacco. Cigarette0tobacco holds numerous substances.12 Proteins and carbohydrates are the foremost representative parts however alkaloids are considerably present too. Nicotine, specifically, represents 95% of the full alkaloids. Nicotine is extremely cyanogenic element and is absorbed0quickly via the tract, oral membrane and skin. Around, 080%-090% of nicotine0is broken down by liver, however kidney, lungs and  gonads are0involved too.2 The usage of nicotine during pregnancy is very harmful because of it is going to directly affect fetal organs development. Nicotine0can easily pass through membrane0barriers because of its lipophilic0nature and activate0nicotinic acetylcholine0receptors (nAChRs).13

Previous researches have revealed that tobacco brings apoptosis and has degenerative effects on testicular tissues that are linked to metabolize oxidative stress.19

Most of the research consideration on Smokeless Tobacco has focalized on malignancy from a clinical or epidemiological stance, together with practice20, harm-reduction0potential21, and risk0perceptions.22 Partial researches via animal models0have shown that long0term SLT exposure may ends up in0reproductive harmfulness together with low sperm production and count among male mice23. Longstanding contact of mice with SLT reduced antioxidant0defense leading to longstanding inflammation within lung and liver24 and can cause testicular cancer. Short term contact research on various SLT kinds in animal models are deficient, mainly their effects on structure of offspring’s testes. Having increased frequency and worldwide practice of culturally-specific tobacco products, this research aims at investigating the effects of smokeless tobacco on microstructure of testes in offsprings of mice.

This experimental study was conducted from July 2017 to December 2017 at Isra University Hyderabad. Twenty non-pregnant Swiss albino mice with normal weight of 34 grams and 10–12 weeks old were chosen which were separated into 2 groups of ten mice each. Female mice were kept alone in polycarbonate0cages in a0temperature (22 °C) and0humidity-regulated0room (55%). Water and food were given ad libitum with dark and light periods kept on 12-hour0cycles.

All female0mice were divided in two groups according to block randomization:

From day 1 (gestation) till parturition, Experimental Group A females (Per cage 2) were made contact to 5% tobacco combined with food ad libitum together with fresh water and Control Group B were made contact to normal forage ad libitum along with fresh water. 1 to 2 days before birthing (GD 18), barriers were made and kept separately. While birth, every mother/offspring set were upheld in hygienic filtered air, besides the quantity of litter by means of feasible offspring with estimated period of pregnancy and size were ascertained. 10 male off-springs were haphazardly chosen from Group A (Experimental) and 10 male off-spring were haphazardly chosen from Group B (Control).

15 days after birth, their initial and final body weight was recorded. The male offsprings of both groups experimental and control were sacrificed, and gonads were detached. For the morphological and histological measurements, the weight of gonads was recorded though weighing scale machine. For the testicular tissues of offsprings in individual groups, hematoxylin and Eosin (H&E) stained segments were used. Slides of four-micron tissue sections were set and investigated for the histological study to see the changes under the light microscope.

All the data was recorded in the proforma and analyzed by SPSS version 20. Mean and standard deviation were calculated for numerical variables. Frequency and percentage calculated for categorical variables.  t-test was applied to compare the body weight, testes weight and histological changes of offsprings among both groups, p-Value <0.05 was considered as significant.

No mortality was observed in the offsprings during the experiment period and the appearance of all control animals was indicative of good health however the experiment animals were observed as lethargic and slothful.  In comparison of weight of testes of 2 weeks age of offspring’s, 0.03 ± 004 g was observed in experiment group however the 0.07 ± 004 g was observed in control group (Table. 2). Micro structural variations were found in testes of offsprings of mice. In experimental group of offspring’s, insufficient layers and reduced number of spermatocytes were detected in seminiferous tubules of 9 testes (Table. 3). Formation of spermatogenic cell lines showed numerous spermatocytes in control group as linked to experiment group. Sperms degenerative changes, cellular inflammation and mild to massive hyalinization were noticed in 9, 6, and 9 testes of experimental group respectively.  Loss of architecture of seminiferous tubules in 8 testes as well as destruction of basement membrane in ST of 7 testes was also observed in experiment group animals. (Table. 3) Figures 2, 3, 4 and 5.

Spermatozoa in the seminiferous tubule lumen of the control group were seen to be more abundant than in the experimental group, Figure 1. However, the decreased number of spermatocytes in only 1 ST and mild hyalinization in 2 testes of control group were observed, (Table. 3) that might have occurred due to the environmental threats on the animals. 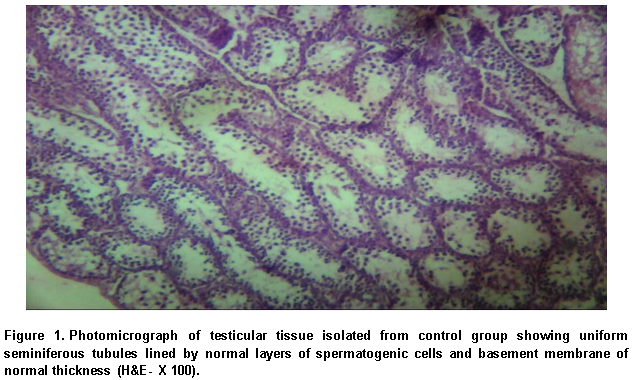 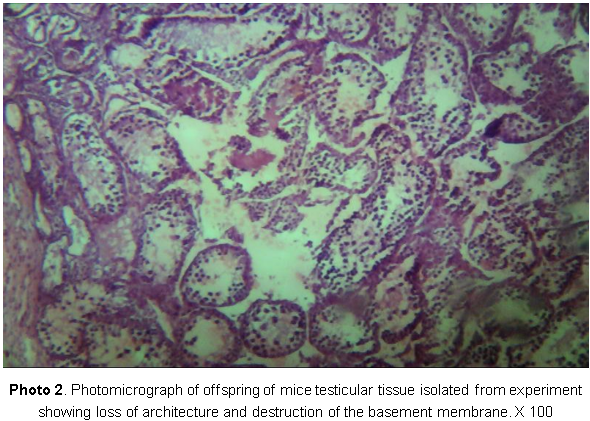 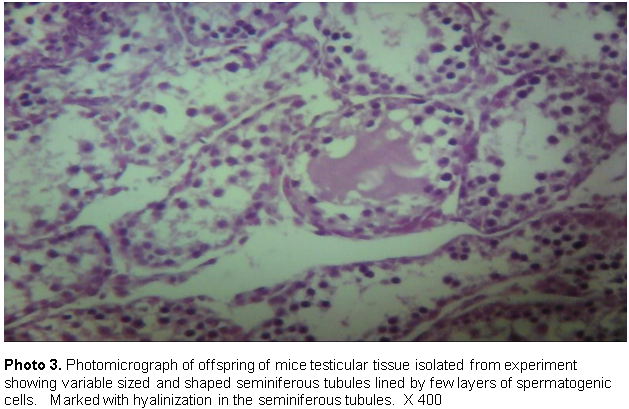 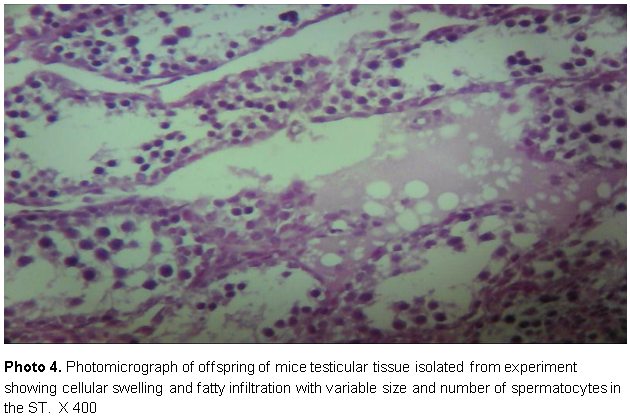 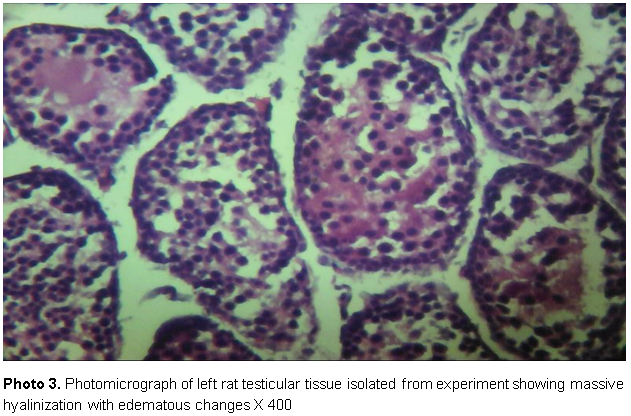 The outcomes of this study showed that smokeless tobacco has lethal effects on reproductive roles of male offsprings mice that is adequate reason to cause sterility. Mice used within current study have been revealed to possess a clear reproductive system. This study specifies that smokeless tobacco (SLT) treatment in male offsprings mice impacts the weight of testes also brings hazardous effects on testes structure.

The results of this study showed a significant decrease in the body weight of the offsprings of
experimental mice as compared to the controls. This finding is in line with the study of Essien & Akpan33 showing similar results in the offsprings of Albino rats consuming nitrosamine.

Another study by EL-Meligy et al34 that highly supports our findings, as reported that the fetuses of nicotine treated mothers are lighter than those of control mothers and this difference in fetal body weight when compared to those of control group were recorded to be highly significant.

The organs weight of the experiment group presented a noteworthy reduction in weight of testes. These finding agree with the Oyeyipo IP28 who has observed same changes in adult rats administered orally different doses of smokeless tobacco.

Smokeless tobacco and its major constituent Nicotine is engrossed into buccal mucosa 3-4 times quicker in chewing0cases as compare to smoking. Degree of Nicotine grows slowly with intensive0chewing practice and residual chemicals endure for a longtime as compare to among smoking cases.29 However, threshold0concentration distressing male reproductive system0is so far not defined.

Smokeless tobacco is identified to interrupt the0hypothalamus-pituitary0axis by disturbing the testicular0microcirculation. As per testosterone0acts on0seminiferous0tubules to start and uphold spermatogenesis, decrease of this sex0hormone level0by impaired0Leydig cell functions or trouble in the estrogen/androgen proportion might be a reason of reduced sperm counts.29

Most prominently, we found evidence of few layers and decreased number of spermatocytes observed in seminiferous tubules. This research evidently proves that chewing tobacco causes statistically large lessening in sperm concentration. These explanations are in step with results of others like Said et al.30 and Aprioku JS et al.31

The significant findings of this study were the reformed morphology and histopathological variation in testes of offsprings of the tobacco processed by mothers. The chief results were the fatty infiltration of seminiferous tubules. Besides, we also observed the cell swellings, mild to massive hyalinization.  Loss of architecture of seminiferous tubules as well as destruction of basement membrane. These results are in accordance with similar results of other researches who have found comparable variations in the testes of adult experimental animals cured with nicotine or nitrosamines.31, 32

The present investigation shows that smokeless tobacco usage of local kind, during pregnancy, has important upshots on body weight, weight and microstructure of testes of offsprings of mice, especially decrease the sperm count as well as results in mild to massive hyalinization, inflammation and destruction of seminiferous tubules. Although, more study is bucked up to affirm the part and mechanics of other brands and mixes of tobacco.

The Consumption of smokeless tobacco has vital effects on the body weight, weight and micro structure of testes of offsprings of mice given with cellular injury of seminiferous tubules parenchyma, especially decreased sperm count, cellular inflammation, destruction of basement membrane as well as massive hyalinization.

1Conception, Synthesis and Planning of the research
4,6,5Active participation in active methodology
2,3Interpretation, analysis and discussion